You are here: Home News & Media News archive Compact versatility with excellent references – both above and below ground

Compact versatility with excellent references – both above and below ground

The mobile Sandvik top hammer drill rig has carved out a career that its developers could scarcely have dreamt of. Since its launch last year, the new Commando DC130Ri model from Sandvik has demonstrated its impressive versatility in a wide range of demanding applications, both above and below ground. 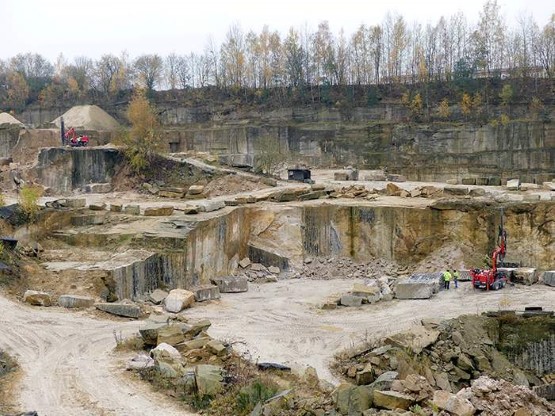 The ambitious home builder in Scandinavia is no different to anyone else when it comes to having a cellar. In solid rock this is no mean feat – and simply too expensive if you have to bring in large top hammer drill rigs to do the job. Almost three decades ago, resourceful development engineers came up with a solution to this cost-benefit conflict in the form of a mobile, lightweight and easy-to-handle drill rig called Commando, which proved to be extremely popular. Construction firms quickly began using it for foundation drilling, trenching, shaft drilling and roofbolting. The Commando has proved its strength in the secondary crushing of boulders in quarries, while in engineered stone applications its clean line drilling is synonymous with efficient block extraction.

Engineered stone for Princes and Kings

The restoration of the Frauenkirche Church in Dresden (Germany) is just one of many prestigious projects that fill the order books of Sächsische Sandsteinwerke in Pirna, whose Elbe sandstone remains a popular engineered product. Deliveries for the Berlin City Palace are currently the main focus of the company's mining activities. The Lohmen quarry and five other quarries between Bad Schandau and Pirna supply different varieties of this much sought-after natural stone. Sächsische Sandsteinwerke GmbH operate the quarries with expert knowledge of the quarrying process and skilled craftsmanship in the mechanical and manual processing of the extracted raw blocks. The traditional construction material is quarried to meet specific requirements. For the City Palace project, coarse-grained sandstone from Lohmen is preferred, along with the slightly softer stone from the quarry in Reinhardtsdorf. Sandvik drill rigs are the main players in the block extraction process. The operator's plant currently includes five of these rigs. Two of them – a Commando DC302 and a brand-new Commando DC130Ri – are currently being used on different beds in the Lohmen quarry. The Commando DC130Ri delivers incredible off-road capability and versatility for vertical and horizontal line drilling. 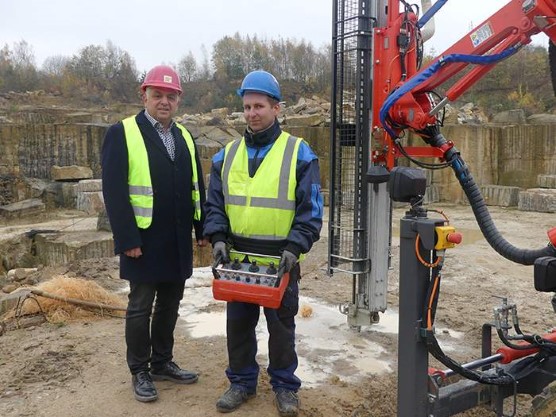 Uwe Jahr, Head of Extracting and Production, explains the reasons for the company's loyalty to the brand: "We tried out other brands, but none of them met the expectations that we had following our experiences with Sandvik equipment. Furthermore, Sandvik has stood by our side as a flexible partner even in times of economic uncertainty." This mutual solidarity has been of benefit to both parties. The most recent example of this is the new Commando DC130Ri. The machine's optimized center of gravity means it can reach even steep slopes without any problems. Drilling operative Andreas Krause skillfully and quickly steers the agile three-tonne machine up the steep ramp to its working bed using the remote control. He then extends the front legs and drills a series of vertical blast holes. It takes just two to three minutes for him to sink a blast hole with water flush and move on to the next one. Having already been familiar with the machine's predecessor, the Commando DC125, getting to grips with the intelligent newcomer was no problem to him. "Operation is slightly different, but just a couple of hours of training were enough to master the machine." The drill operative appreciates having the machine as his clever assistant, which features a roll-over system that delivers significant time savings when drilling horizontal holes.

Too many voids in the wrong places – but not any more 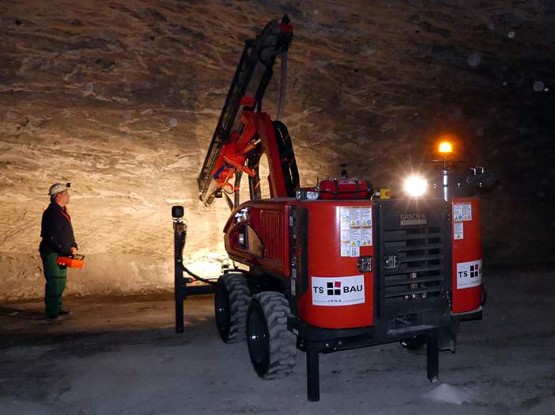 The former potash mine in Teutschenthal in the Saalekreis district is currently operated as a stowage mine for non-mining mineral waste. Backfilling of the voids created in the course of room-and-pillar mining is important for safety reasons. The rock burst of September 1996, which led to the collapse of the entire eastern part of the potash mine, was a catastrophe that must not be repeated, and this has expedited the process of systematically backfilling these voids. The company charged with this task is GTS Grube Teutschenthal Sicherungs GmbH & Co. KG. To access the closed chambers and tunnels during the backfilling process, the operator called on the expertise of TS BAU GMBH. Armed with the required background knowledge and supported by three mobile Sandvik drill rigs – two Commando DC125 models and one of its successors, the DC130 – the experts opened up the closed areas and widened them for subsequent backfilling. The new Commando DC130Ri top hammer drill rig quickly demonstrated its performance enhancements when used underground. Equipped with a highly energy-efficient hydraulic hammer, ergonomic controls and dust extraction, the new Commando is an impressive machine, even when breaking through occasional clay veins. The feed-percussion follow-up for the automatic adjustment of the drilling energy to varying rock conditions compared with basic rotary drilling during driving quickly paid for itself. The roll-over drill feed delivers flexibility in areas that are difficult to access. Another welcome feature is the much neater hosing and electrical wiring on the boom of the DC130Ri compared with its predecessor.

Holes for blasting are placed at the removal hot-spots in each layer. The dust seal is positioned close to the wall and thus makes a clean job of air-flushed drilling. Blasting is then performed to widen voids or to access closed chambers.

Blasting technician Alexander Ackermann skillfully maneuvers both types of Commando – the 125 and the 130 – to the next deployment location on the quarry bed using the remote control. The older 125 models offer impressive reliability, while the new model ensures brand loyalty thanks to features for improved utility value and comfort. Yes, there may be a difference in operation – but the intelligent control systems make it easy for experts to bring the Commando DC130Ri with four-wheel drive undercarriage into position. The intelligent drilling control system provides assistance during drilling. The experienced blasting technician appreciates the ability to change all drilling parameters during drilling if necessary, not to mention the improved performance of the new Commando.

TS-BAU site manager Jürgen Schrade has nothing but good things to say about his experiences with "his Commando". Other suitable underground drill rigs would have cost his company a lot more and offered a lot less flexibility. Thus he has three compact and versatile models for underground use, which are also suitable for many other applications once this job is finished. That is his vision for the future. But first, there's plenty of work to do underground

Positive feedback from a wide variety of users

In practice it is clear that Sandvik reliability comes not only from the products themselves, but also from the advice, sales and service provided by Germany's Sandvik drilling technology experts. While the qualities of the new Commando DC130Ri speak for themselves, this positive assessment has certainly helped the market launch of the improved all-rounder. Some of its state-of-the-art functions, such as intelligent engine control, have previously only been found on larger drill rigs, but are now also available to users in the three-tonne class. Experts from a wide range of application areas agree that the Commando DC130Ri represents a significant upgrade in utility value compared with its predecessor. Looking back at its original development goal, it is clear that the Commando has enjoyed a meteoric rise, and we haven't yet reached the end of Commando evolution 1.