Search
Change languages
You are here: Home Parts & Services - Newsroom How the MAKO™ Ground Engaging Tools (GET) were developed

How the MAKO™ (G.E.T) were developed – with a little help from their friends

Over a four-year period, Australian mining contractor Byrnecut was instrumental in the development of the new and improved Ground Engaging Tool (G.E.T) system from Sandvik – MAKO™.

When you are at the sharp end of underground mining, wear and tear is unavoidable. And nowhere is it sharper than for buckets and the shrouds fitted to them. In the most abrasive conditions, the shrouds can wear out in just a few hundred hours of work. Replacing them – especially when they are welded on – can take multiple shifts: valuable hours where the machine is out of action and productivity dented.

To speed up this process, in 2001 Sandvik introduced its Shark™ range of Blue Pointer™ Ground Engaging Tools (G.E.T) – becoming the first retensionable shroud system for the underground market. Blue Pointer™ can be summarized as shrouds using mechanical fixings that are significantly faster to replace. Even though the system is the market leader in underground mining, nothing is perfect and everything can be improved. With that in mind, in 2018 Sandvik set about developing a replacement – MAKO™. But the company did not do it alone, but in close cooperation with internationally renowned specialist mining contractor, Byrnecut. 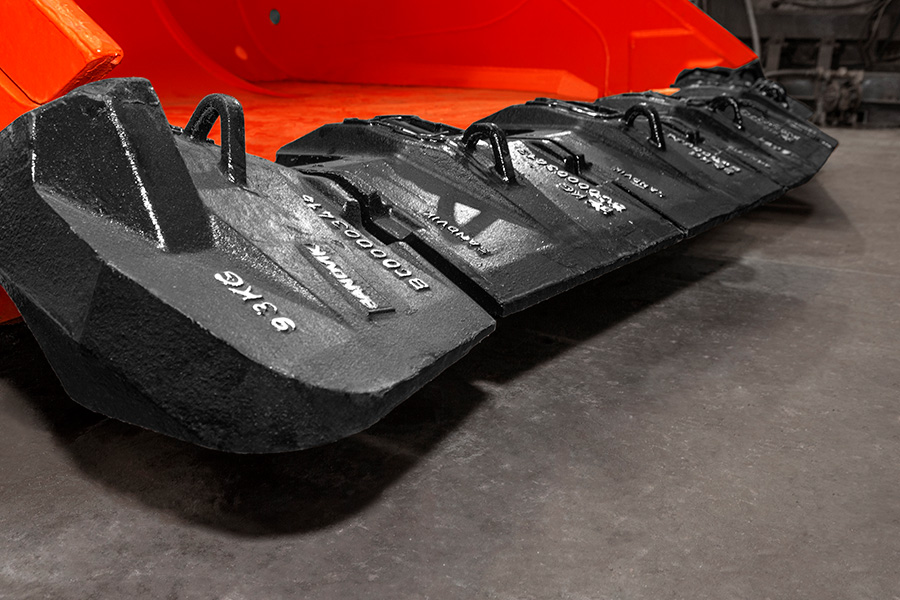 MAKO™ continues the shark theme, with a Mako being a shortfin predator – the name literally means ‘shark tooth’ in Māori. On the eve of its global release, MAKO™ brings with it several advantages; an innovative patented locking mechanism, hammerless removal system, cast corners improvement (patented), and additional wear indicator, just to mention a few.

By far the biggest improvement in terms of reducing downtime and cost-per-ton-mined can be found in the MAKO™ corner shrouds. Normally, corners – who have a much harder life – tend to wear out and need changing at the mid-life point, compared to the rest of the shrouds. In extreme conditions an additional two ‘half corners’ can be needed for every set of normal shrouds. But thanks to improved material and design, with MAKO™ there is no need for part-life replacement corners.

‘In theory, theory and practice are the same. In practice, they aren’t’

Designing a new G.E.T is one thing, making sure it performs in the toughest conditions is quite another. That is why every MAKO™ prototype was tested in the field. Byrnecut was instrumental in this process, trialling the concept at one of its most abrasive sites – the Capricorn copper mine near Mount Isa in Australia’s Queensland. “Sandvik came along with a team of engineers and said: ‘Right, are you willing to help us develop MAKO™?” says Gary Boswell, Byrnecut’s chief maintenance supervisor at the mine. “So, we got on board and had a good working relationship with Sandvik. Right from the start we were looking for the same outcome – to lower total-cost-of-ownership and achieve a 1:1 [corner:shroud] ratio – so that we only changed corners when we changed all the other shrouds.”

The Capricorn mine has five Sandvik loaders (LH621) fitted with 10.7m3 buckets. Boswell expects to get 7,500 hours out of a bucket, and because of the aggressive nature of the rock, replaces the G.E.T every 500-550 hours, on average. That is roughly 14 sets of MAKO™ per bucket life. So, making them last longer and easier to change all-in-one-go can make a significant difference to downtime and cost over that lifetime.

Metal where it matters

MAKO™ has not achieved its durability performance by simply adding more metal. It’s put metal where it matters, and the overall MAKO™ system has a very favorable weight/performance ratio.

The first MAKO™ Ground Engaging Tool was fitted at Byrnecut’s Capricorn site in January 2019. Despite the remote location, the buckets were monitored by Sandvik’s experts on a weekly basis. It soon became clear that the new range was especially durable – lasting on average 12% longer than the best of the rest, as well as avoiding the need for half-life corner shrouds. 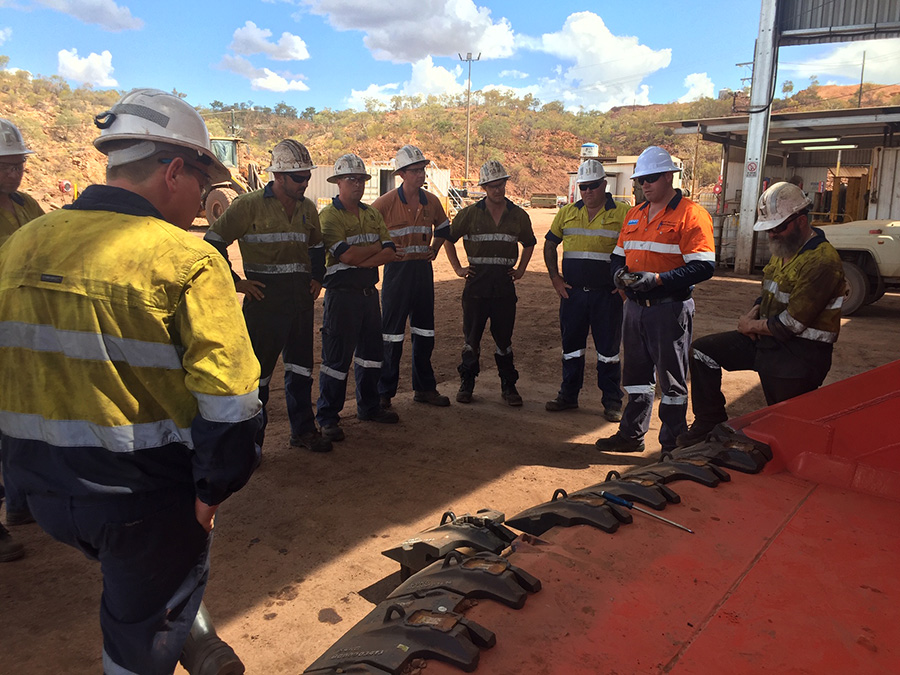 “The first prototype we thought was okay, but there is still room for improvement,” says Michael McCormick, the Shark™ Loadmaster who was hands-on with the development of MAKO™. “The feedback we got from Gary and the team at Capricorn really helped us understand the issues they were having. When something cropped up, we could quickly develop a short-term ‘hotfix’, before developing a longer-term solution. For instance, we found an opportunity to improve the locking system and had to adapt the pin assembly to ensure the push-off feature was truly hammerless. As is natural, we had some performance issues with earlier prototypes, and it took us a couple of goes to get it right. But the ability to work in real time with Gary’s team was the key to enabling us to respond rapidly with quick fixes and validating their effectiveness.”

“Safety is paramount,” says Gary Boswell, “and we did not want our guys hammering or using oxyacetylene to get the shrouds off. But Sandvik fixed that with the push-off feature that can handle worn-out Ground Engaging Tools, even those with lifting lugs eroded through use. The issue of transporting heavy shrouds has also been resolved by a new lifting device, which is very effective.”

Ground Engaging Tools may seem like a relatively minor issue when taken in the context of an entire mine. But when, like Byrnecut at the Capricorn mine, you are using several hundred sets each year, the MAKO’s collective benefits add up to significant productivity, cost, time, and safety enhancements. The clever design of MAKO™, perfected in the field, helps keep buckets meet their availability and productivity targets.