Leading gold producer Gold Fields will work with Sandvik to trial new battery electric vehicles (BEVs) as part of a major production study to run over the next two years.

Under a deal between the two companies, Gold Fields’ St Ives operation in Western Australia’s Eastern Goldfields will become the first mine in Australia to receive the new Sandvik LH518B 18-tonne BEV underground loader. The operation will also take delivery of an Artisan Z50 50-tonne BEV truck, with both vehicles to be placed into service in the Hamlet North mine. The Artisan Z50 is the predecessor to the recenty launched Sandvik TH550B 50-tonne battery electric truck. 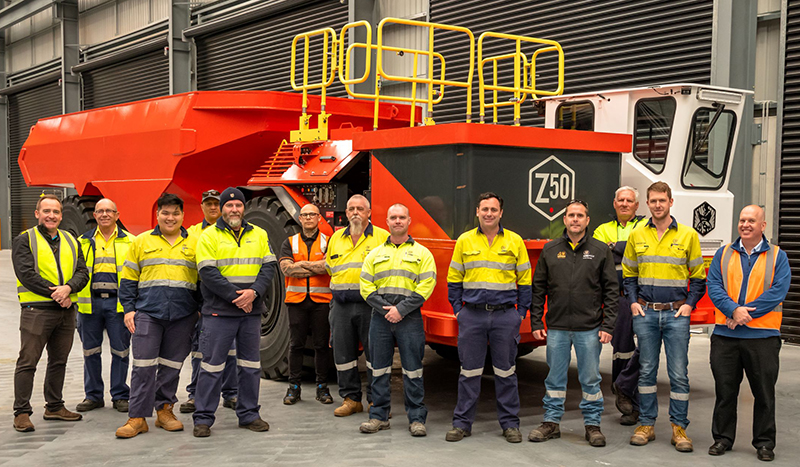 The battery electric technology used by the vehicles eliminates underground emissions and significantly reduces heat and noise compared to diesel vehicles. Meanwhile, Sandvik’s AutoSwap self-swapping battery system allows for a fresh battery to be installed in under 6 minutes for the Z50 and LH518B, delivering a major advantage over ‘fast-recharge’ battery vehicles.

Gold Fields’ Vice President – Operations (Australia), Graeme Ovens, says Gold Fields has been interested in exploring the potential of BEVs for a long time and is delighted to be collaborating with Sandvik in the trial. “We travelled around the world looking at different suppliers,” he says. “And we came to the conclusion that Sandvik was ahead of the market with their concepts and what they were doing.”

Sandvik Business Line Manager - Load and Haul, Andrew Dawson, says that the trial represents a true partnership between Sandvik and Gold Fields. Information gathered over the course of two years will be analysed and used to enhance not only the vehicles at the St Ives operation but also future Sandvik BEVs.

“The real-world data that we gather will be invaluable,” he says. “Our expectation is that these battery electric vehicles will prove not only clean and reliable but that they will deliver extremely high levels of uptime.”

Mr Ovens says a key advantage of the Sandvik BEV system compared to fast-charge battery vehicles was the ability to swap batteries and get back to work. “The machine won’t be parked for half an hour or 45 minutes while it charges,” he says. “You can swap the battery in 6 minutes or less and keep the machine operating. Fast-recharge systems just can't match the speed of changing the battery.”

He says another advantage is the environment created for staff. “One of the biggest benefits is no diesel fumes and a better working environment for the people underground. There's less heat, less fumes, and it's a quieter a machine than diesel.”

Part of a carbon-reduction strategy

Mr Ovens says Gold Fields sees the use of BEVs as part of its strategy of reducing carbon emissions from its operations. The company’s Agnew gold mine in Western Australia is run on 55-percent renewable energy thanks to a hybrid power-generation system. A similar system is under consideration at St Ives, targeting an impressive 85-percent contribution from renewables.

If the trial with the Sandvik BEVs delivers strong results, Mr Ovens anticipates such vehicles will become widely used across Gold Fields’ operations.

“If this trial is successful, and we believe it will be, then we will look at rolling this technology out to our remaining underground mines in Australia,” he says. “We have also had our South Deep mine in South Africa asking for this technology. They will be keeping a watchful eye on the results of the trial.”

Mr Ovens says Gold Fields’ ambition is for its underground mining operations to be fully electric with no diesel machines at all underground. “We're also aiming to be fully automated and, hopefully, to get to a point where there will be nobody working underground. Everything will be either autonomous or operated from the surface.”

Andrew Dawson says the trial has been made possible due to the high levels of trust and respect between Sandvik and Gold Fields. To date, the only other production trials undertaken around Sandvik BEVs has been in the United States and Canada.

Gold Fields is due to take delivery of the Z50 in the next few weeks and the LH518B in December.

A dedicated team from Sandvik will be working closely with the Gold Fields team during the trial period to ensure that all data is captured and the experience from both Sandvik and Gold Fields is utilized to ensure the uptime and productivity targets are met.

---------------------------------------------------------------------------
Sandvik Group
Sandvik is a high-tech and global engineering group offering products and services that enhance customer productivity, profitability and safety. We hold world-leading positions in selected areas – tools and tooling systems for metal cutting; equipment and tools, service and technical solutions for the mining industry and rock excavation within the construction industry; products in advanced stainless steels and special alloys as well as products for industrial heating. In 2020 the Group had approximately 37,000 employees and revenues of about 86 billion SEK in more than 160 countries within continuing operations.

Sandvik Mining and Rock Solutions
Sandvik Mining and Rock Solutions is a business area within the Sandvik Group and a global leading supplier of equipment and tools, parts, service and digital solutions and sustainability-driving technologies for the mining and construction industries. Application areas include rock drilling, rock cutting, loading and hauling, tunneling and quarrying. In 2020, sales were approximately 33.6 billion SEK with about 12,500 employees within continuing operations.